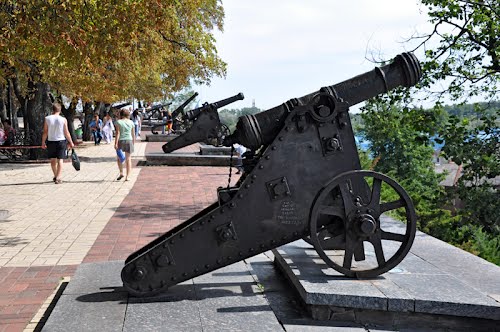 This is the oldest part of Chernihiv, a hill on a high bank of the Desna River, where the princely Dytynets and complex of fortifications of the city were located. The remains of kniazivsky’s terems and boyars’ tower homes were found here. Two temples (XI-XII centuries), building of the Collegium (1700), regimental office (XVIII century), known as “Kamyanytsa Lyzohuba”, other buildings XVIII-XIXth centuries are well preserved. After the liquidation of Chernihiv fortress in the XIXth century the defensive Val above the river was turned into a park, monuments to Taras Shevchenko and Alexander Pushkin were erected. 12 cast-iron bastion cannon (XVII century), which are considered to be the visiting card of the city, are placed on Val.