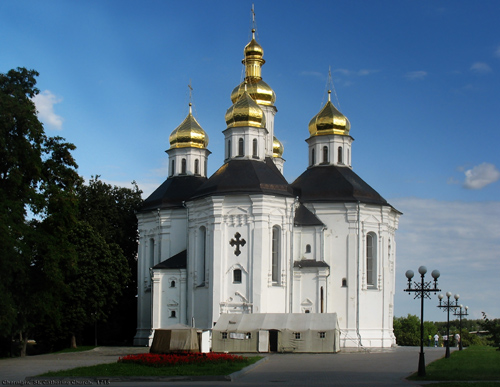 St. Kateryna’s Church solemnly greets everyone who comes into Chernihiv from the Kyiv side. It is considered to be the symbol of the city. It is located on the opposite to Dytynets hill, on the Alley of Heroes. The temple is in the Ukrainian Baroque style, built on the site of an ancient temple of Kyivan Rus period at brothers Semen and Yakiv Lyzohuby costs, by the will of their father E. Lyzohub in commemoration of the heroism of their grandfather Yakiv Lyzohub and Cossacks of Chernihiv Regiment, showed by them in the storming of the Turkish fortress of Azov in 1696. In Soviet times St. Kateryna’s Church was closed. In 1975-80 it was renovated. Exposition of the Museum of Folk and Decorative Arts of Chernihiv is placed inside the church. Now the temple works, belongs to Ukrainian Orthodox Church of Kyivan Patriarchate.